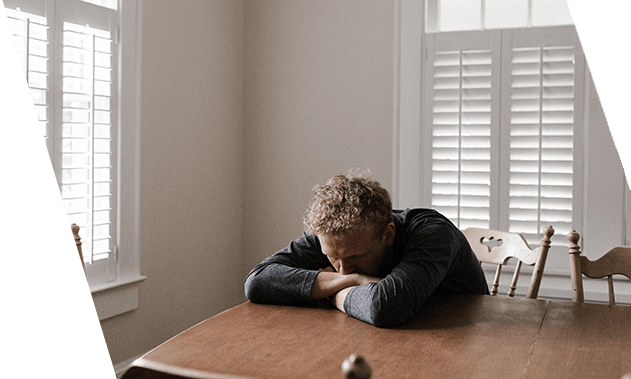 Celexa and Lexapro are drugs used to treat the major depressive disorder (MDD), anxiety disorders, and other mental health issues. They are among many other medications that are used for treating these conditions, and knowing which to use can be a challenge.

While a patient should rely on their doctor for guidance on the proper medication, knowing the differences and similarities between the two is beneficial. It will help a patient identify if either of the drugs is having an adverse effect or if there is something important to tell the doctor about their overall health history and symptoms to choose the most effective meds. To help you with that, the article examines the use of Celexa vs. Lexapro for anxiety and other important attributes of the two drugs.

What Are Celexa and Lexapro?

Lexapro and Celexa belong to a group of drugs called SSRIs — selective serotonin reuptake inhibitors. These medications block serotonin reabsorption, which increases the amount of this neurotransmitter in the brain. High levels of serotonin result in better communication between neurons (brain nerve cells). These drugs are called selective since they only act on serotonin and not other neurotransmitters.

Other SSRIs include Zoloft, Prozac, and Paxil. The FDA approves them for the treatment of depression, and they are also used for treating other mental health disorders. The FDA approved the use of Celexa for MDD in 1998, while it approved Lexapro in 2002.

Similarities Between Lexapro and Celexa for Anxiety

These two drugs are both SSRIs working by preventing serotonin reuptake. They reduce anxiety symptoms by promoting better communication among the brain’s nerve cells. Both Lexapro and Celexa have associated withdrawal symptoms when a patient discontinued their use and share similar side effects, including vomiting, nausea, increased sweating, and dry mouth. Also, both meds have their generic versions available, which cost about the same price. The generic version of Celexa is Citalopram, while the generic version of Lexapro is Escitaloprám.

Both Celexa and Lexapro are prescription medications, but none is a controlled drug. Apart from treating anxiety, they can be used off-label for the treatment of the obsessive-compulsive disorder (OCD), post-traumatic stress disorder, PTSD, binge-eating disorder, premature ejaculation, and premenstrual dysphoric disorder (PMDD). Both drugs are available in liquid and tablet form and are taken once daily as well as have a similar likelihood of interacting with other drugs like St. John’s Wort, Tramadol, and monoamine oxidase inhibitors. However, they both have a low potential to inhibit hepatic enzymes, making them have few drug-to-drug interactions.

Difference Between Celexa and Lexapro

The first escitaloprám vs. citalopram difference is in their composition. The citalopram consists of two stereo-isomers. These are S-citalopram and R-citalopram. Stereo-isomers are compounds with the same chemical formula but different atomic arrangements. On the other hand, Lexapro has only one isomer, which is S-citalopram.

While Lexapro has FDA approval to treat depression and anxiety, Celexa is only FDA approved for treating major depressive disorder though it can be used off-label for GAD. Off-label refers to taking meds to manage a health issue even though it has not received an FDA-approval to treat it. In such a scenario, the doctor has to determine if the benefits of using the drug outweigh the potential risks. The two drugs are not always used for the same off-label purpose. For example, Celexa can be prescribed off-label to treat panic disorder, social anxiety, and aggression disorder associated with dementia. 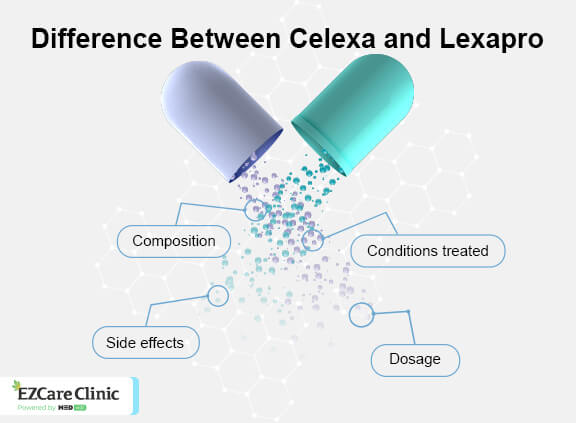 4. Side Effects and Tolerance

As for tolerance, available research shows that Lexapro is generally more tolerable than Celexa and other SSRIs.

Only a certified mental health professional can choose the most suitable anxiety medication.

Connect With A Prescriber

One of the fears of many MDD or GAD patients is gaining weight while using antidepressants. The reason is primarily that the improved symptoms lead to the increased appetite that a patient had earlier lost, and not directly due to medication. While most antidepressants will have this effect, some may result in more weight gain than others. However, both Lexapro and Celexa cause similar weight gain without any significant differences.

How Long Does It Take for Celexa to Work?

It varies on a case basis, but some symptoms of anxiety like sleep problems will improve within the first two weeks. More significant symptoms will be observed by the eighth week.

How Long Does Lexapro Take to Work?

Like other SSRIs, the Lexapro effect will be evident after it has accumulated in the body increasing serotonin levels. You will observe improvement in your energy levels, sleep, and appetite in the first two weeks. By the sixth to eighth week, you will notice a further significant improvement in the other symptoms.

Lexapro Vs. Celexa: Which One Is Better

One advantage of Lexapro over Celexa that makes it the better medication for depression is fast acting with one study showing that patients observed significant improvement in their depressive symptoms in their first week compared to what patients on Celexa observed in their fourth week. 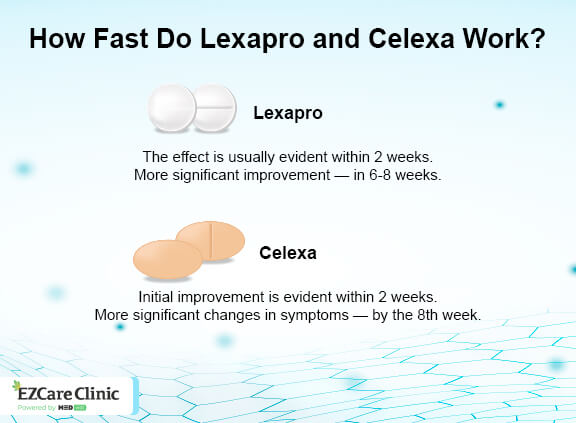 Can You Switch from Celexa to Lexapro?

Because of the above-mentioned differences, it may be tempting to consider switching from Celexa to Lexapro. Usually, doctors may consider changing their patients’ prescriptions if there are no significant improvements in the symptoms after a considerable time. A patient may wonder, switching from Celexa to Lexapro, how long to notice the difference? That depends on the individual and the prior state of your condition. It will usually take about two weeks for you to start noticing relief in some symptoms.

While it may appear Lexapro is the better medication, in other patients, Celexa acts better. Doctors consider switching between antidepressants and doses to find an effective solution. You should not take the two together and various factors are considered when determining the right dosage. It is vital you seek and follow your doctor’s guidance on the right medication and provide detailed feedback on the effects of the prescribed treatment.

Real help for Anxiety.
Beat your symptoms with our expert advice.

previousThe Cycle of Depression and Isolation: How Are They Connected?

nextBest Therapy for ADHD in Adults